We made a run out to Rogersville Sunday afternoon.  We expected the roads to be filled with like minded individuals, but only met up with a handful of other cyclists.

The conditions were perfect.  Nothing more could have been asked.  We both picked the right combination of tops and jerseys to stay cool, but comfortable.

Going east on FR 194 we almost turned south on Finbrooke, but picked a more conservative and direct route to R-ville.

I like seeing rustic farm equipment and riding in the country.  This preference will keep me from ever riding in a place like downtown Atlanta! 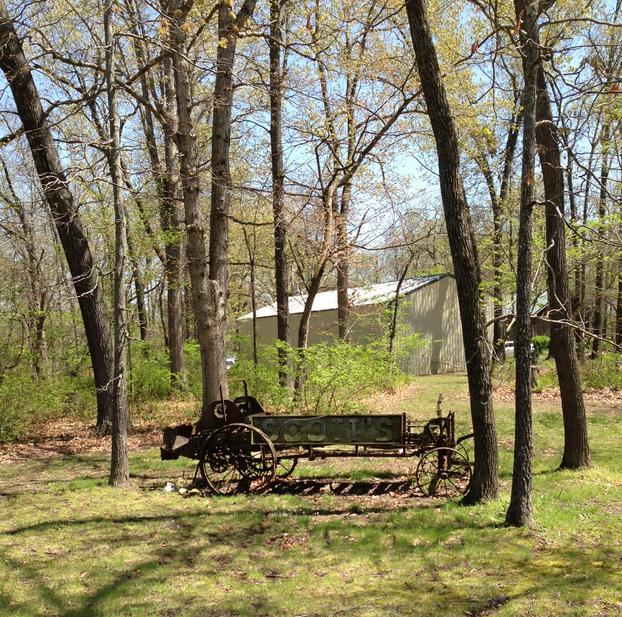 This old farm wagon is at the conjunction of FR 194 and Finbrooke.

After a stop at Rogersville we crossed north over Hwy 60 and took the business route west to FR 253 where we headed back south.

(Steve, in a recent post, wrote about meeting a fellow that was going to participate in RAAM.  For those who don’t know, RAAM is the biggest race across our country.  Some think it is more difficult than any of the Grand Tours.  I particularly liked Steve’s comment, “It was great to chat with someone about to embark on such a major undertaking.”

As it happened, Jan and I were soon to meet people on their own major undertaking.)

When we reached the highway and were waiting to cross, we saw a van on the other side with a couple of cyclists.  I wondered if we were seeing some sort of supported ride and decided to stop and find out what I could.

We met Greg and his wife Susan and her brother Dennis.

Oh yes, and their dog Jack!

Heading east, they began their trek in San Diego about four weeks ago and plan on reaching their home church on Staten Island late May or early June.  Susan has taken on the responsibilities of writing a blog and their dog is in charge of Security.  Jack chases after unsuspecting rocks, so if you happen to be a rolling stone, beware!

Dennis was on the phone when we met up with them so our conversation was with Greg and Susan.  They provided articulate answers to our questions and I predict a successful finish, except for the usual flat tires, etc.  Susan had just told a friend that they had not met many cyclist when soon after, Jan and I showed up.  Chance meeting?  I don’t think so.

We soon parted company, thankful for the meeting and back home in a reasonable amount of time.  God bless them and protect them on their way.

A perspective on life and cycling in the Ozarks. I started serious cycling in 2008, after seeing my wife be on the bike for a few years. We have biked many places and hope to continue. I am no where near being a real good cyclist, but I have fun trying to improve. Who am I kidding? Me? Improve??
View all posts by rlhoover →
This entry was posted in Commuting, Cycling, Ozarks, road cycling, springfield missouri and tagged bicycling, cycling, Ozarks, road cycling, Rogersville, springfield. Bookmark the permalink.